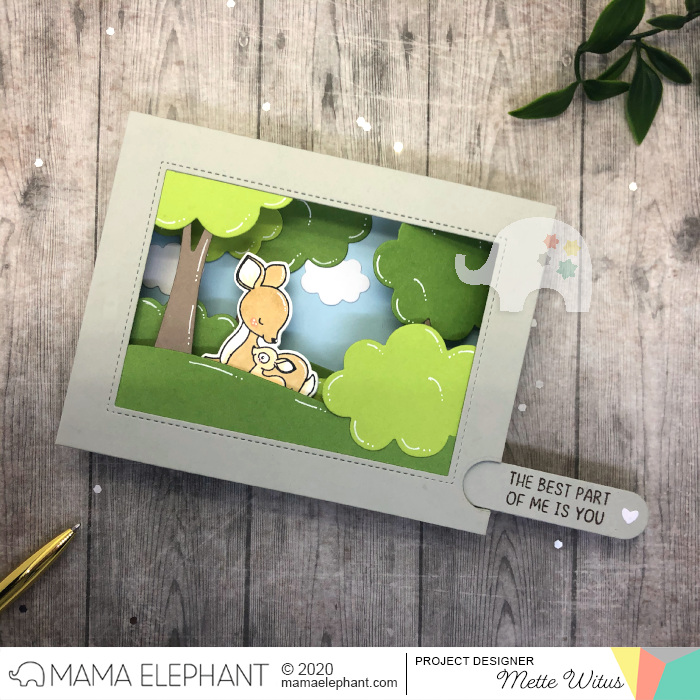 Since I knew I didn’t want to copic color all my bushes, trees and other scenery, I stamped the adorable deer from Family Time, but kept my coloring very, very simple to match the plain cardstock die cuts. I actually only used three copic markers: E31, E51 and R20.

To start off my display I cut the Display A Card base die twice from light grey cardstock. I glued the two pieces together on one flap, like Rina shows in her introduction video, and then added all the scenery and Slider Glider mechanism before adhering the other flap. I simply cut a bunch of “bushes” from two different green cardstock colors, and some small white clouds. I added a bunch of white gel pen details to the die cuts and images.

Since I can’t explain how to use the Slider Glider dies as well in writing, I highly recommend watching Rina’s awesome introduction video on the Mama Elephant YouTube channel.

I assembled my slider glider and cut a notch from the Display A Card base, making sure to cut all the way through the folded section.

Then I added a green hill to the front of the display so I have somewhere to hide the slider mechanism, which I adhered after making sure it would pull out through the notch in the card.

Remember to add your images and stoppers before covering up the mechanism, just like Rina shows in the video. I also stamped my sentiment on the pull tab.

Then I continued building the right side of the display, making sure to cover up most of my cute deer with a bush, as well as adding a tree for the deer to land under.

For the back, I cut down a piece of light blue cardstock to be slightly smaller than 4 ¼ x 5 ½ inches. On top of that I added the hill, tree and clouds, making sure to add in all the white highlights. Then I glued the blue cardstock to the back of the display a card. I did not glue down the left side of the cardstock, where the last flap will go, because I wanted to slide my tab behind the blue cardstock, so you can’t see it when displaying the card.

Make sure to cut off anything that sticks out of the card. All you need to do then is check everything is working as it should before gluing the last tab down.